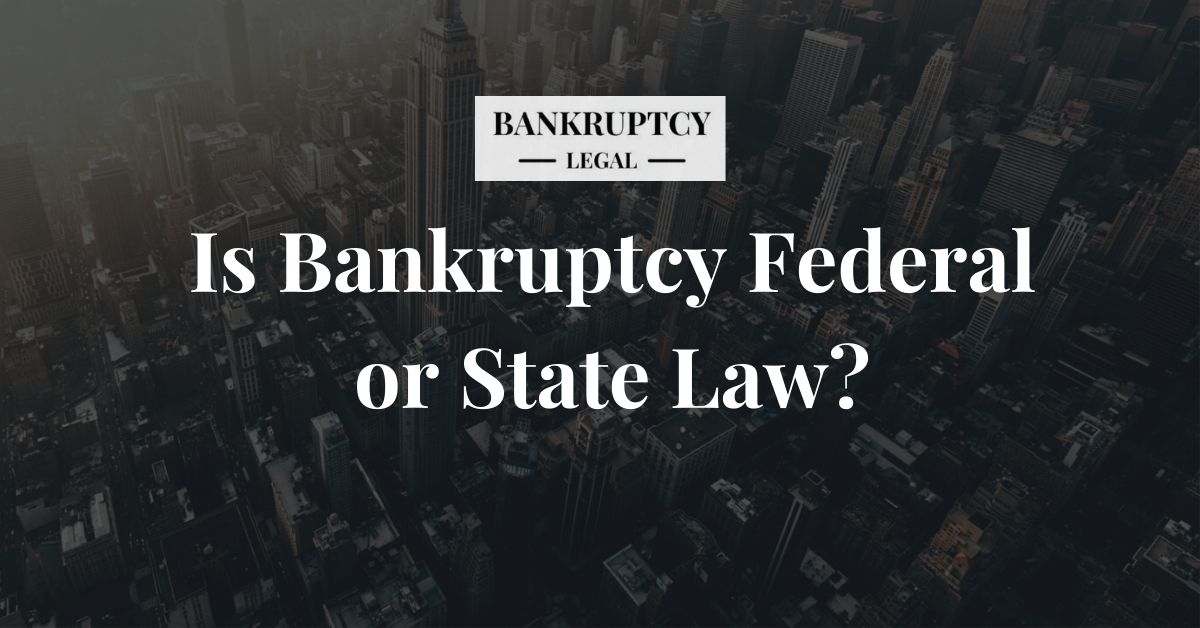 Is Bankruptcy Federal or State Law?

What is bankruptcy? Filing a bankruptcy petition is normally a debtor’s solution to a fresh start. It is a federally recognized method that relieves a debtor—a person, organization, or municipality—of total obligation for the debts by negotiating court-approved partial repayment plans.

In the US, bankruptcy is developing as an accepted approach to addressing major financial difficulties, despite its reputation as a terrible last resort. In the significant year of 1992, a million people filed for bankruptcies throughout the United States, and the number of reported personal bankruptcy filings doubled throughout 1984 and 1994.

Corporate bankruptcies are prevalent, especially when firms are sued, and even municipal governments use bankruptcy procedures to get out of debt.

The purpose of current bankruptcy is to give the debtor a “new start” while also repaying the creditor. Debtors convert their assets or rearrange any finances to pay off their obligations through bankruptcy. Individual debtors are allowed to keep specific exempt assets, including their car, home, and common property goods, under bankruptcy law, allowing them to sustain a normal standard of living whilst working to pay all creditors. Debtors are now better equipped to reintegrate into society as productive individuals, but with severely blemished credit records.

The History of U.S Bankruptcy Laws

The U.S bankruptcy laws are based on English statutes from the 16th century. Debtors who attempted to dodge their financial obligations were often sentenced to prison under early English laws. Changing attitudes sparked the creation of debt discharge in the 17th century. As a reward for the debtor’s help in attempting to minimize the amount, courts began to annul debts. Borrowers were increasingly treated with pity, and a recognition that punitive measures such as jail were generally ineffective for creditors.

As a result, a law that was originally intended to punish debtors has developed into one that protects the debtor whilst promoting the resolution of outstanding financial obligations.

The original U.S. bankruptcy laws did not include England’s eighteenth-century insights; instead, laws mainly based on England’s older punitive bankruptcy statutes ruled U.S. colonies. Individual states had separate laws addressing debtor-creditor conflicts after the Declaration of Independence was signed, and the laws differed greatly.

The United States Constitution gave Congress the right to create consistency with federal bankruptcy law in 1789; however, it took more than 10 years for Congress to pass the Bankruptcy Act of 1800. This legislation, like the earlier English bankruptcy rules, prioritized creditor relief and didn’t permit debtors to seek relief of their own volition. The statute was repealed three years after it was enacted due to widespread popular unhappiness.

Philosophical arguments over who bankruptcy legislation should protect (creditor or debtor) kept Congress from passing consistent federal bankruptcy law for the following 40 years. The Bankruptcy Act of 1841 gave debtors more rights and, for the very first time, giving them the choice of looking for bankruptcy relief voluntarily. This act took 18 months to complete. In 1867, a third bankruptcy law was passed, but it got repealed in 1878.

Financial obligations comprising debts formed by contracts, such as telephone service, rental leases, and medical expenses, are often governed by state laws. However, once a creditor or debtor files for bankruptcy, federal law takes precedence over state law, which is because the United States Constitution empowers Congress to “establish… uniform Laws on the subject of Bankruptcies throughout the United States” (Article I, Section 8). The federal bankruptcy power ensures state uniformity, facilitating interstate business and ensuring the nation’s economic stability. Several debtor-creditor matters that don’t clash with or are not handled by federal bankruptcy law remain within state jurisdiction.

What Are the Various Types of Federal Bankruptcy Cases?

Rehabilitation and liquidation, often referred to as reorganization, are two types of remedies available under federal bankruptcy laws. Liquidation is the most common type of bankruptcy in the US, and it is controlled by Chapter 7 of the Bankruptcy Code. A U.S trustee takes the debtor’s non-exempt items and transforms them to cash in a chapter 7 liquidation proceeding. The U.S trustee then gives out the remaining funds to the creditors in accordance with the Bankruptcy Code’s priority system. Creditors usually gain only a percentage of the funds owing to them by the bankrupt party, if any at all.

Irrespective of the kind of bankruptcy or the groups involved, each bankruptcy case is affected by basic procedural and jurisdictional issues. Bankruptcies are more consistent, efficient, predictable, and equitable when procedures are uniform.

A trustee gets appointed to administer the bankruptcy estate, which consists of the bankrupt’s non – exempt assets. The trustee acts on behalf of the bankruptcy estate, which becomes a separate legal entity from the debtor after the bankruptcy is filed. On behalf of the property, a trustee can sue or get sued. Other trustee responsibilities vary based on the types of bankruptcy, but they can include disputing estate asset transfers, liquidating or selling assets, appealing to creditors’ claims, and refusing debt discharge. Other than in Chapter 11, all bankruptcy cases involve trustees, who are usually private persons chosen by creditors or elected by the United States Trustee.

The office of the U.S trustee, which was established officially in 1986, is in charge of monitoring the admin of bankruptcy cases. Every bankruptcy region is assigned a U.S trustee by the U.S Attorney General. The United States trustee is responsible for appointing trustees in some situations and ensuring that trustees handle bankruptcy estates honestly and competently in all circumstances. Trustees in the United States also keep an eye on and identify debtor fraud and abuse, as well as overseeing specific debtor activities including filing reports and fees.

The large number of bankruptcy cases are now filed by debtors. Voluntary bankruptcy refers to a debtor’s decision to file for bankruptcy. The simple voluntary bankruptcy filing petition serves as a legal order for debt relief, providing the debtor with immediate safeguarding from any creditors excluding the need for a hearing or additional formal adjudication.

The automatic stay is an essential privilege granted to the debtor in bankruptcy. Furthermore, the automatic stay halts all debt collection efforts, compelling lenders and other stakeholders to wait for a bankruptcy court to decide the case fairly and evenly.

When specific circumstances are met, the U.S Bankruptcy Code permits bankruptcy judges to dismiss cases. The bankruptcy court may be asked to dismiss the matter by the creditor, debtor, or an additional interested person. Petitioners—debtors in voluntary cases or creditors in involuntary cases—can ask for the petitions to be withdrawn. A petitioner’s entitlement to dismissal is absolute in certain types of bankruptcy cases; in others, judicial consent and hearing are required before the case gets dismissed. When a debtor engages in uncooperative or dilatory behavior, or when a debtor significantly abuses the privileges afforded under bankruptcy laws, creditors, the bankruptcy court, or the U.S. trustee have the ability to dismiss bankruptcy cases.

The chapters of the Bankruptcy Code that the federal court and bankruptcy judge applies to the debtor’s case include:

The Bankruptcy Reform Act of 1994, which was prompted by an increase in public concern and bankruptcy filings over systemic injustices, is one example of Congress’s ongoing attempt to protect creditors’ and debtors’ rights. The legislation made it simpler for personal debtors to qualify for chapter 13 reorganization, in line with Congress’s purpose of encouraging reconstruction over liquidation. People with debts over $450,000 were previously ineligible to file for bankruptcy in terms of chapter 13 but were instead compelled for reorganization under the more complicated and costly chapter 11 or liquidation under chapter 7.

The 1994 changes enable debtors with unresolved financial liabilities of up to $1 million to reorganize in terms of Chapter 13.

Credit card debts utilized to pay federal taxes or those over $1,000 incurred within 60 days of filing bankruptcy are not discharged under the new law, which benefits creditors. With this method, the law discourages debtors from going on shopping sprees or engaging in other illegal activities immediately prior to filing for bankruptcy. Recent provisions benefit creditors by establishing additional reasons for gaining relief from an automatic stay and requiring faster adjudication of claims for debt relief from a stay.

With the passage of the Reform Act of 1998, it appeared that the bankruptcy process would undergo further reform. The legislation was enacted as an answer to a published report by the National Bankruptcy Review Commission, which advised that the current bankruptcy code be tweaked to encourage debtors to seek chapter 13 reorganization and repay their debts faster. The published report was released in response to concerns that debtors were abusing the bankruptcy system, as demonstrated by the reason that a record number of people filed for bankruptcy during a period of economic boom.

However, the Bankruptcy Reform Act of 1998 was never passed, and it simply became the first shot in a long and winding road for any piece of legislation.

The basic objective of every bankruptcy reform law introduced in 1997 is the same. Individual borrowers were discouraged from filing a chapter 7 bankruptcy, which enables them to liquidate debts, and urged to pursue a chapter 13 bankruptcy instead. If the borrower is found able to pay portions of the debts under a methodology set forth in the Reform Statute, the chapter 7 filing is considered abusive. People who have the potential to repay portions of the debts with future earnings are obliged to file for chapter 13 bankruptcy.

The primary criticism leveled at all of the bankruptcy reform bills introduced in 1997 is that they give an advantage to lenders at the expense of borrowers who may be unable to pay but who actually fail the average test utilized to figure out whether they may make any type of restitution. However, this isn’t the main point why bankruptcy reform hasn’t been passed. The Reform Act of 2001, for example, failed since it included a clause that prevented anti-abortion demonstrators from evading a criminal fine by filing for bankruptcy. Additionally, anti-abortion legislators who might have normally backed the bill teamed up with opponents to oppose it.

In March 2003, the House of Representatives passed an additional bankruptcy code reform bill by votes of 315–113.

While Congress debated bankruptcy reform, the United States Supreme Court issued two rulings that expanded the scope of bankruptcy law. In Cohen v. De La Cruz, a unanimous bankruptcy court decided that where a borrower committed fraud and got awarded punitive damages, his or her debt is not dischargeable as the Bankruptcy Code’s prohibition against the release of unlawfully obtained debts isn’t limited to the value of the property, money, or services gained by the borrower.

Apart from legal changes, bankruptcy was a hot topic in the early stages of the 21st century, as the economic decline led several of America’s most well-known corporations into chapter 11 reorganization bankruptcy. With $64 billion in assets, the power trading giant Enron filed for bankruptcy in 2001, making it the largest business bankruptcy in history.

World-Com, a telecommunications company, broke the record less than one year later when it reported $104 billion regarding assets in the bankruptcy petition. Financial services company Conseco, K-Mart (retailer), and United Airlines parent firm UAL were among the other notable American companies to declare bankruptcy.

Whether a chapter 9, chapter 11, or chapter 12 petition, bankruptcy courts may appear quite intimidating. The bankruptcy process is complicated, and legal terms such as “automatic stay,” “assume,” “discharge,” and “exemptions,” are used, which can make it more complex. However, keep in mind that uniform laws on the subject matter are generally dealt with in the federal court.

What Does Bankruptcy Chapter 13 Mean?

What Does Chapter 7 Bankruptcy Mean?

How to File for Bankruptcy in California: A Comprehensive Guide

Going Bankrupt Consequences: All You Need to Know

Can Anyone File for Bankruptcy?

How to File Bankruptcy Without an Attorney

What Types of Bankruptcies Are There?

Is Filing for Bankruptcy a Good Idea?

Is Bankruptcy Federal or State Law?